I wish I would have known about this when we first married almost 20 years ago. This one question will help to save your marriage.

Last night, Kelly and I had a fight, and for the first time in almost 20 years, Kelly decided to sleep on the couch.

It was late, we had just wished the last teen to leave Morgan’s birthday party farewell. As we headed to the kitchen to clean up after having 30 teens over for a party we were exhausted and ready for bed!

We started out strong helping and working together to clean up the after effects, as I am sure you can imagine, were pretty impressive. Paper plates, cups, and food were strewn throughout in the kitchen and dining room. We both worked hard to pick up and return our house to an order of somewhat before heading off to bed. 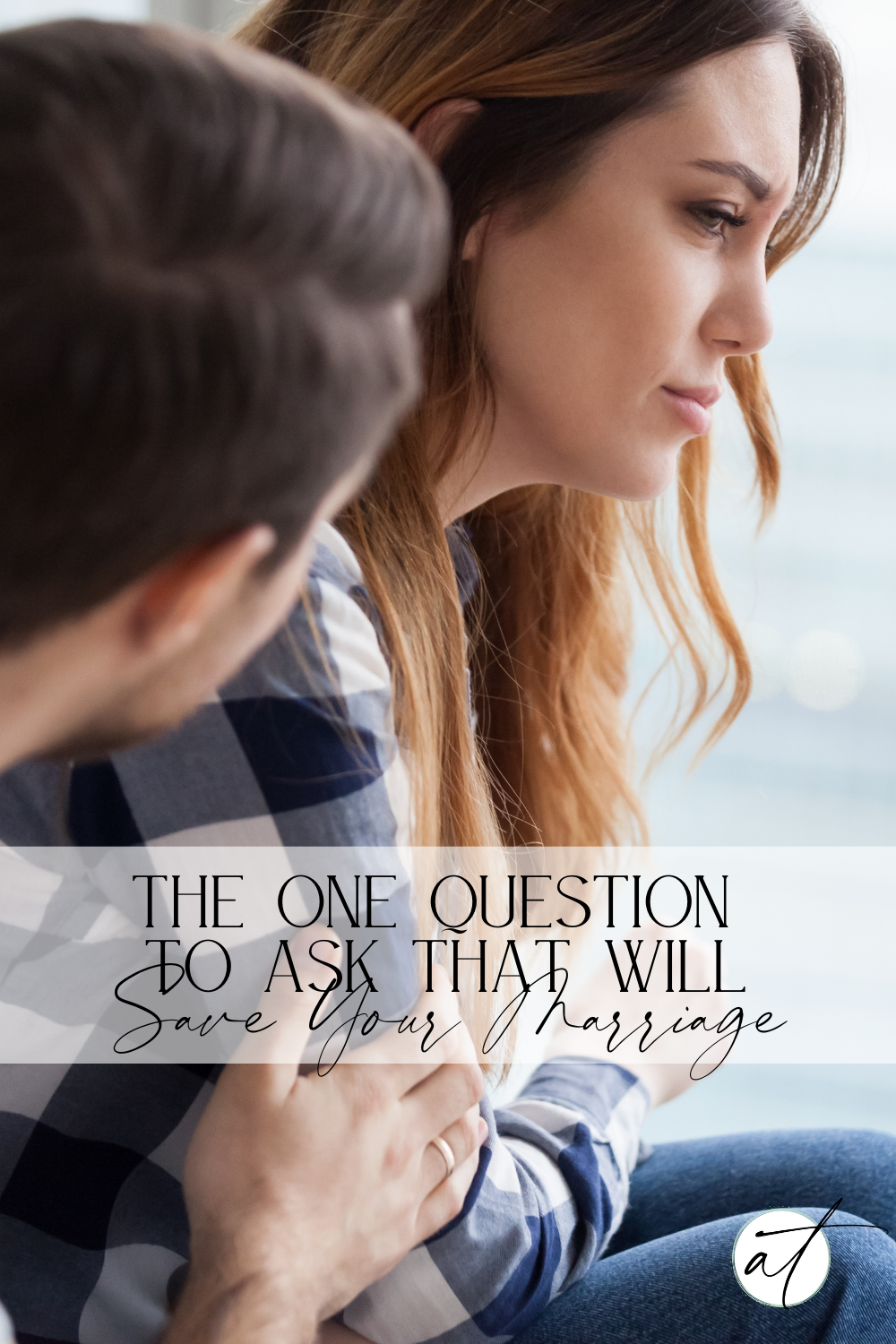 I am notorious for leaving cabinets open when I am working – I have been trying to remedy this bad habit for years! It drives Kelly insane! To me it’s no big deal I’ll catch them eventually after the job is done. When I am working on something I am super focused on the task at hand and the peripherals such as open cabinets get completely forgotten.

Well, last night I left a cabinet open, resulting in Kelly banging his shin hard on one of my open cabinets – he was pissed! He was hurt and tired and He let me have it.

I was tired and my guard was up and I said something I should never have said. Those words I said under my breath were ten times as hurtful as his shin banging on the cabinet.

As he berated me, I said “well you wouldn’t have to worry about it, if I was gone”

Talk about a knife to the heart – I don’t think I could have said anything more hurtful.

But in my defense, I didn’t mean I was leaving or divorce was an option, I meant if I was gone, as in dead.

I wondered in my mind as I was feeling hurt at the attack of my lack of ability to close a cabinet – if God took me and brought me home if Kelly would miss the open cabinets and having someone to yell at.

Life is short and fleeting and we don’t know when our time is up. We only have NOW!

Will it matter in 5 years that I left a cabinet open and Kelly banged his shin? -No!

We like all couples find ourselves in fights over the dumbest things – things that in a month, 3months, a year, 5 years will not even matter!

It is hard in the moment to focus and remember this. We as imperfect human beings do not always have an eternal perspective and tend focus on how we feel in the here and now.

One thing that I have tried really hard to do is ask myself before allowing a fight to go any further, is “will this matter in 5 years?” – If it won’t then I take a deep breath and let it go.

So has I huffed off to the bathroom, door closed wishing Kelly would fall asleep before I  was done washing my face and brushing my teeth, I was still seething.

When I emerged from the bathroom to see his side of the bed empty and his pillows gone – my heart melted and I remembered my rule.

I took a deep breath and said a little prayer and headed downstairs to where I knew I would find my Kelly.

I flipped on the light and told him to get his booty back in bed and that in 20 years of marriage we had never slept apart on purpose and I was not about to start.

He was still mad – and was not budging from his couch bed – so I told him that if he was not going to join me in our king size bed, then I would join him on the couch. So I nudged him over and attempted to slide in next to him on our couch and in an instant we were both laughing as we as two grown adults tried to fit on a couch. As I teetered on the edge of the couch I reached up and kissed him and apologized for my hurtful words and he apologized as well. We laughed and very carefully exited the couch, heading upstairs to share a very roomy king size bed.

We are not perfect – we never claimed to be. But after 20 years of marriage, we are still very much in love. We are committed to each other and we try hard to keep the passion and romance alive.

Remember when fights arise, and they will – even over dumb stuff like cabinets being left open. Remember in those moments to take a breath and ask yourself the question “will this matter in 5 years” and re-evaluate if you should head down that road if a fight will be worth it. Stopping to ask yourself this one question over and over again can save your marriage from a lot of unnecessary fights that will only drive a wedge between you and your spouse.

Choose LOVE and cherish these moments you have been gifted with, you never know when they may end. If you really want to save your marriage, it means making it your biggest priority.

Ask anyone who has lost a spouse if they wish they had one more day to fight over open cabinets, who didn’t take out the trash or who left the toilet seat up.

PS I promise I have a renewed zeal to remember to close cabinets to protect Kelly’s beautiful sexy shins from any future pain from my doing.

Remember to save your marriage, its about putting in the time, and seeking to find peace and enjoy even the small moments we are blessed with everyday.